Albania like the rest of the Balkans was overrun by the Ottomans but not before the national hero Skanderbeg put up a fierce resistance. Albania accommodated the Ottoman's better than most of the Balkans with many Albanians converting to Islam. There was always a degree of autonomy probably best illustrated by the rule of Ali Pasha.

Finally a growing sense of national identity took hold in the 19th Century that eventually led to independence after the Balkan Wars and WW1. After a short rule by the German Prince Wilhelm of Wied came the wonderfully named King Zog. The Italians annexed Albania in 1939 and fought a disastrous war against Greece before the Germans bailed them out. After the war the communist partisans took over led by Enver Hoxha who ruled Albania until his death in 1985. Albania returned to democracy in 1990.

Many people are put off travelling to Albania, mostly by those in Montenegro and particularly Greece who will tell tourists it not safe. It is of course true that Albania has its challenges. Not least are the generally poor roads and many Albanian drivers who have no concept of a highway code and drive like lunatics. Public transport is OK but would be difficult to do a tour like this in a reasonable time. Facilities for tourists are limited, particularly opening times of attractions, translations, guidebooks etc.

On the other hand the Albanians are very friendly and are only to willing to help obviously lost foreigners. There are good hotels, the food is typical Mediterranean fare and car hire was straightforward. As long as you take the usual precautions Albania is no more risky a place to travel than anywhere in western Europe.

I flew direct from London Gatwick to Tirana, British Airways managed to lose my bag in Gatwick but you can hardly blame that on the Albanians! Having decided on my itinerary for the week Regent Holidays booked the flights, car hire and the hotels. Their local representative was very helpful.

Albania is essentially a coastal plain surrounded by high mountains. This is essential to any understanding of the military history of the country as it is travelling. The coastal plain is generally reasonably quick to get around (allow extra time for the state of the roads) but any trip to or through the mountains is very slow.

I went in May when the climate is reasonable. It gets very hot in high summer, even in the mountains. If your less than enthusiastic partner isn't convinced by this trip, there are stunning beaches particularly in the south whilst you visit the sights. It is also good value for money when you get there.

There is a good Bradt Travel Guide on Albania by Gillian Gloyer that is an essential resource as is a good map. I recommend the Freytag & Berndt as the Cartographia one has a number of errors.

My first full day was spent mostly in Kruja the centre of Albanian resistance to the Ottomans and the site of one of Skanderbeg's greatest victories in 1467. It is about an hour's drive from Tirana and you can get a car up to the old town. Spend some time in the covered bazaar where you can pick up your souvenirs because it is probably the only place in Albania that really does tourism. The obligatory Skanderbeg bust, flags, caps and a DVD of the great man's life. The castle is everything you would expect perched on a rocky outcrop.
It includes a good historical museum that everyone justifiably calls the Skanderbeg museum. The Ethnographic museum is worth a quick look if only to see how Albanian houses were built for defence.
Day 2 involved a two hour drive north to Shkodra (former Scutari) near the Montenegro border. Only one not to be missed site here, Rozafa Castle. It dominates the approach to the city from the south on a hill at the confluence of three rivers.
First fortified by the Illyrians the castle has Byzantine, Venetian and Ottoman influences. It is well preserved and includes a small museum and a good restaurant. In later times the castle was the Ottoman command post in the various sieges of the town by the Montenegrins during the Balkan Wars.
On the way back I stopped at Lezha that has another impressive castle site. This was another part of a chain of castles that lit beacons to warn Skanderbeg and his forces of Ottoman attack. There is a very poor road part the way up and I abandoned the car. However, after a long walk, on a hot day, I arrived to find the castle closes at 3pm! but still you can get a good idea from the walls.
Lezha also has Skanderbeg's tomb in the ruins of the Cathedral. Closed again at 4pm despite the entrance sign saying it opened till 7pm, but again you can see most of it from outside. They don't do the great man justice in Lezha!
Day 3 started with a walking tour of Tirana. The National Historical Museum is well worth a few hours. The displays take you through Albanian history chronologically. There are helpful translations on many exhibits and the maps are good. As no photies are allowed a guidebook would have been helpful. A small shop sells some English language publications and some more are available in the bookshop over the road in the Palace of Culture.

Not surprisingly the museum is strongest on the late 19th and 20th centuries including a particularly good collection of artillery and small arms. One of the joys of Balkan museums is the historical spin each country adopts. There is a diagram of the Battle of Kosovo 1389 that shows the Albanians on the right flank of the allied army (generally accepted) and another unit in the centre. The Albanian right wing routing the Ottomans, whilst the Serbian's are defeated. Contrast this with a similar diagram in the Serbian army museum in Belgrade that makes no reference at all to the Albanians!

Skanderbeg square is the heart of the city and has a huge statute of the man.

If you continue down the main boulevard to the park you can visit the British Memorial Cemetery that commemorates the 40 British and Commonwealth troops who died in Albania during WW2.

A short journey outside Tirana on the Elbasani road takes you to another of Skanderbeg's castles, Petrela. Perched high above the road this is an impressive sight and is accessible by a good road (for a change!) up to the village. It is then a shortish climb to the remains that have been taken over as a restaurant by an enterprising local. On a hot day this was very welcome

Day 4 involved a long drive south. First stop was the fortress of Berat. You can drive right up to the gatehouse and then walk the extensive battlements from where the strategic significance of this site is obvious. There were several sieges including an important Ottoman victory in 1455.
Another long drive over a particularly bad stretch of road to Tepelene. Hard to believe this is the main north-south road although in fairness there are signs further south that the government is doing something about it. Tepeline is the birthplace of Ali Pasha and has a fort built by him. The walls are in good condition because this used to be a particularly notorious prison for political prisoners in the communist era. Lord Byron's visit to Ali Pasha is commemorated on the fortress walls.
On to Gjirokastra and another superb castle high above the town, again well preserved because it was a prison. Outside next to some smoothbore cannon there is an allegedly shot down US spy plane. 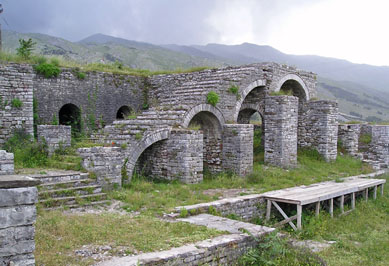 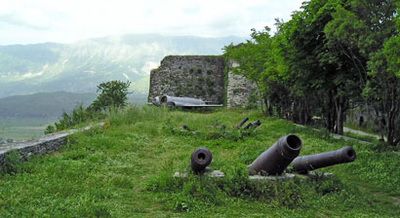 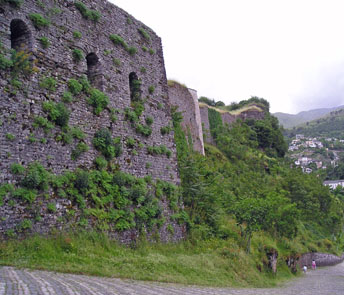 The castle houses what must be the strangest artillery museum I have visited. Each exhibit has a bay in an almost pitch black part of the castle with a wide variety of Italian, German and Russian weaponry including an Italian tank. Gjirokastra was fought over during the 1940 Italian Greek war.

Day 5 started exploring Gjirokastra's interesting old town. I can recommend staying in Hotel Kalemi which is a modernised version of the beautiful 19th century houses in this part of town.

Then on to Saranda via the interesting underwater spring called the Blue Eye. Not a great deal to see in this typical tourist town other than the modest remains of the old town walls. But it is a good base for exploring the coast and if you have dragged your partner this far, this is known as the Albanian Riveria. Nice beaches without the overdevelopment elsewhere in Europe.

Day 6 was a visit to Butrint. First colonised by the Greeks it became a Roman colony and later expanded by Julius Caesar. It later became a Venetian base and latterly under the control of Ali Pasha who built a fort to protect the channel from the British in Corfu. The site can only be described as superb. Built on a peninsula, a narrow channel gives access to a bay that was mostly used as a fishery. The Venetians strengthened the defences with a tower on one side and a well preserved triangular fort on the other. The town itself has well preserved walls and a number of buildings that makes this one of the most important ancient sites in the Med. You can really get the feel of what the town must have been like and the different periods are well described through a series of display boards.

On the way back you can stop and look down on Ali Pasha's square fort. Needs a boat to get across to it. The local insect population started to dive bomb me at this stage so I retreated. 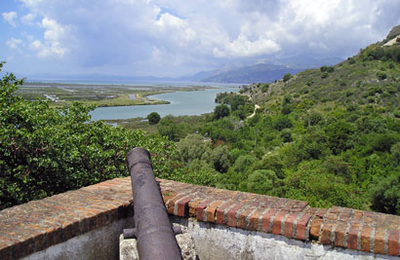 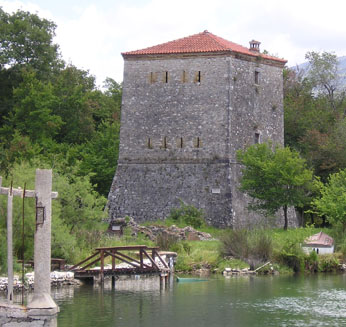 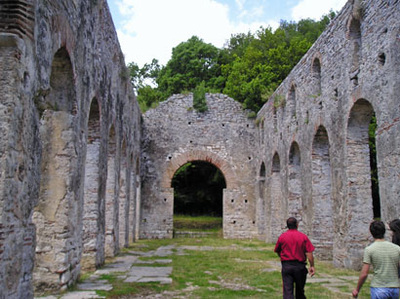 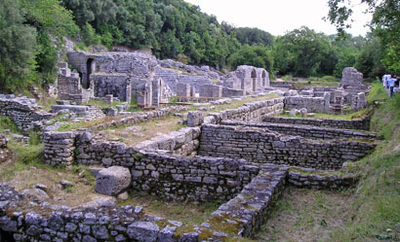 On the last day a long drive up the coast back to Tirana, made worse by a truly awful road as far as the Llogaraja pass. The highlight was Palermos Bay with another square Ali Pasha fort on a promontory into the bay and the former submarine base blasted into the cliffs. 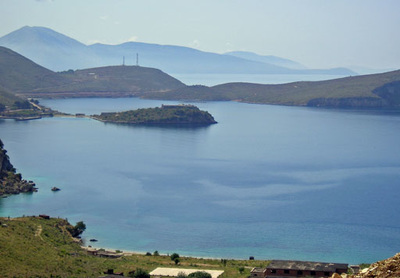 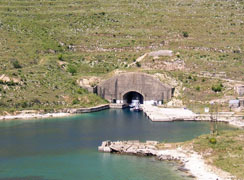 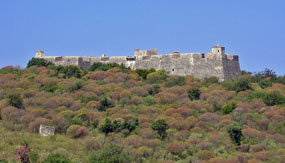 One last drive with a stop off for a final drink at Durres. Gazing out to sea it was tempting to imagine Pompey and the Senate sitting in the same spot trying to guess Caesar's next move. Mine was to the airport and home. A fascinating trip and one, despite the challenges, I would recommend.
​