A Napoleonic invasion of Ottoman Turkey

​A couple of threads got me thinking about the prospects of a successful invasion of the Ottoman Empire during the Napoleonic period.

Jonathan Spencer's fictional trilogy set during the run-up to Napoleon's Egyptian expedition reminded me that Britain did not know the final destination of the fleet assembled in the ports of southern France. The options included a sweep north to invade Britain, Naples, Sicily, Istanbul, or Constantinople as the western powers still described the city.

I was also doing some research in the National Archives. I came across a massive drawing by George Pink, completed in 1799, of the castle at Kelletbahar, which appears to be the English spelling of Kilitbahir, one of the castles defending the Dardanelles. William Wittman, in his book ‘Travels in Turkey, Asia-Minor, Syria, and Across the Desert Into Egypt During the Years 1799, 1800, and 1801, in Company with the Turkish Army, and the British Military Mission’(London, 1803), spells it this way. The plan is interesting in that it is a plan of the castle and projects a new fortress on the heights above the castle. He was a Royal Artillery doctor serving with a military mission to the Army of the Grand Vizier. This mission was part of the British support to the Ottoman Empire that ended with the successful Egyptian campaign of 1801. I hadn't realised that the British advisers, including Colonel Holloway, had been with the Ottoman army for a couple of years before that campaign. 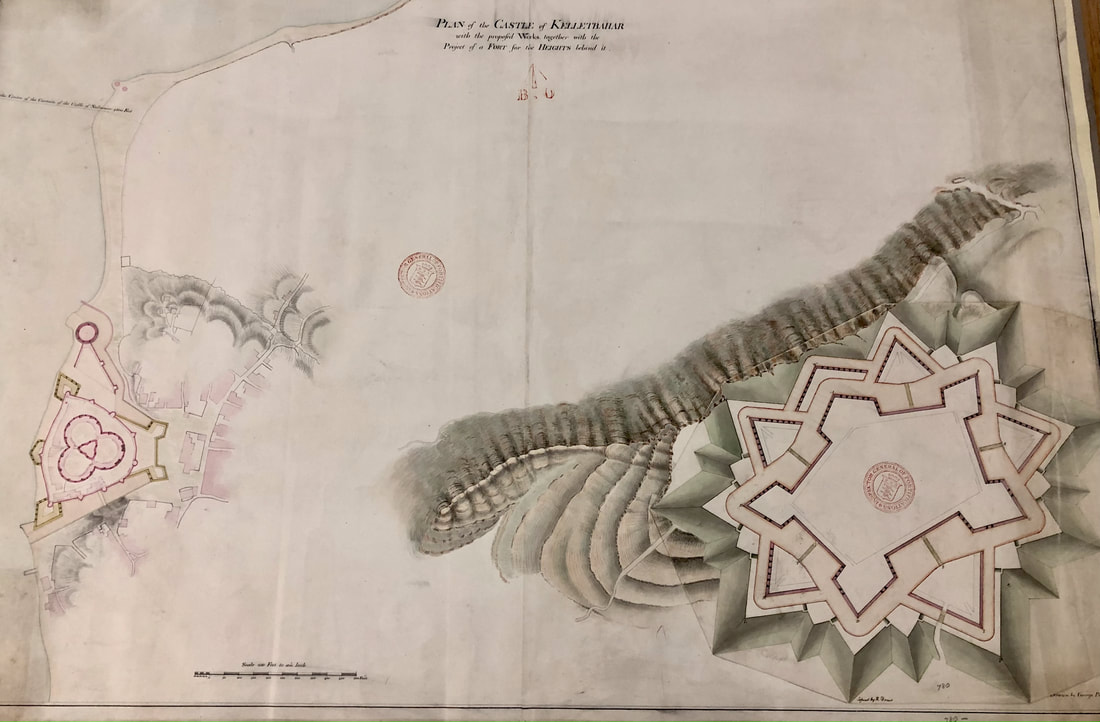 British plan of the castle and proposed fortress dated 1799 (The National Archives WO 78/780)
​While the British were assisting with the defences of Istanbul, others were suggesting ways it could be captured, although more likely by the Russians. The Prussian Major-General Baron von Valentini wrote a book ‘Military Reflections on Turkey in 1820’. I have an English translation in 1828 published by the much-missed Pallas Armata booklets in 1995. He sets out in some detail how an army of 200,000 could capture Istanbul and take much of Asia Minor. The primary force would be 50,000 strong with a detached column on the coast of 30,000. The remaining troops are for garrisons and reserves.

He proposed a direct line of march to Istanbul, containing the fortresses on the Danube and Adrianople (Edirne), supported by a naval attack from the Black sea, which would land at Scutari. He argues that the castles defending the Bosphorus could be reduced by naval fire.
​Wittman refers to the Turkish gunners practising with heated shot, which suggests they may have been better prepared than the Baron thought!  He was not impressed by the defences of Istanbul itself, which he believed could be reduced by cutting off the water supply. His plan proposes an advance to the Sakarya River and then establishes a military border on the Austrian model. The Turkish War of Independence, some two centuries later, springs to mind when reading this plan!

So, a few interesting what-ifs in addition to the actual history. Of course, Napoleon didn't take on Istanbul and probably didn't have the naval resources to risk it. Ironically, the Russians might have followed the Baron's advice in their war against the Ottomans starting in 1808. However, Napoleon's invasion of Russian in 1812 forced them to seek a quick peace.