The Goths were East Germanic tribes who, in the 3rd and 4th centuries, attacked the Roman Empire in the Balkans.

In the 5th and 6th centuries, divided as the Visigoths and the Ostrogoths, they established powerful successor-states of the Roman Empire in Spain and Italy.In the 3rd century, they launched one of the first major invasions of the Roman Empire but in 271 they were driven back across the Danube. They settled north of the Danube and established an independent kingdom centered on the abandoned Roman province of Dacia. Under pressure of the Huns, in 376 the Goths asked the Eastern Roman Emperor Valens to be allowed to settle on the south bank of the Danube. Valens permitted this, but following a famine the Gothic War (376-382) took place, and Goths and local Thracians rebelled. The Roman Emperor Valens was killed at the great Gothic victory at the Battle of Adrianople.

The Visigoths were one of two main branches of the Goths, (the Ostrogoths being the other) during the fifth century. Together these tribes disturbed the late Roman Empire and a Visigothic force led by Alaric I sacked Rome in 410. Honorius granted the Visigoths Aquitania, where they defeated the Vandals and by 475 ruled most of the Iberian Peninsula.

The Ostrogoths under Theodoric the Great from 488 conquered all of Italy. The Goths were briefly reunited under one crown in the early sixth century under Theodoric the Great, who became regent of the Visigothic kingdom following the death of Alaric II at the Battle of Vouillé in 507.
The Ostrogothic kingdom persisted until 553 under Teia, when Italy briefly fell back under Byzantine control, until the conquest of the Lombards in 568. The Visigothic kingdom lasted longer, until 711 under Roderic, when it had to yield to the Muslim Umayyad invasion of the Iberian Peninsula.
​
Typical Gothic forces of the early period as shown here consisted of a small number of spear armed foot supported by large numbers of archers. However, the main battle winning force were heavy cavalry. 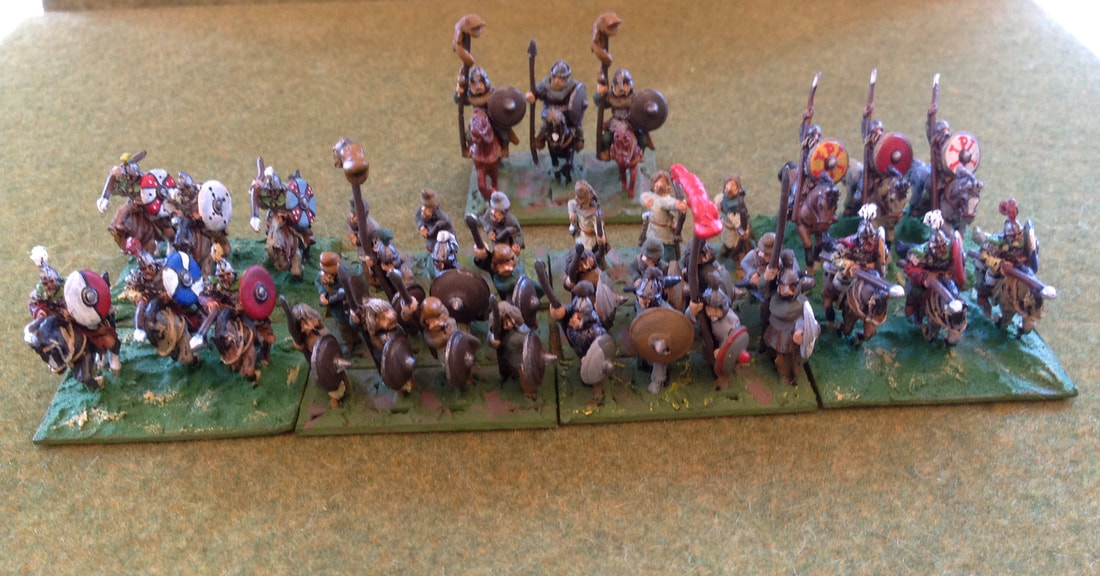