The battle of Kosovo Polje (Plain of Blackbirds) was fought between the Ottoman forces led by Sultan Murad and an allied army led by the Serbian Prince Lazar on 28 June 1389. This article gives an overview of the battle with photographs of the battlefield today courtesy of Peter Verduyn.

Ironically the decisive battle of the Ottoman invasion occurred some years earlier on the banks of the River Maritsa on 26 September 1371. The Serbian army was heavily defeated and many nobles accepted Ottoman vassalage. According to Ottoman historians these included Prince Lazar making the 1389 campaign, to Ottoman eyes, one of justified retribution.

The Ottoman forces were split into the usual three sections. The centre commanded by Murad himself with the foot; the right by his son Bayezit with the European Sipahi cavalry; the left by his other son Yakub with the Anatolian cavalry. The core of the Ottoman army consisted of Turkish troops although there would have been contributions from Greek, Bulgarian and Serbian vassals.

Prince Lazar's army included a core of Serbian troops including his son-in-law Vuk Brankovich  together with the Bosnian leader Ban Tvrtko and other contingents including Croats, Wallachians and Albanians. The Serbs occupied the right wing and the allies on the left with Vukovic commanding the reserves.

The conduct of the battle is clouded by contrary claims. Ottoman historians claim the Serbian charge on the centre was disrupted by baggage camels while Bayezit's right wing broke the flank and rolled up the Serbian forces. Serbian historians claim Vuk Brankovich abandoned the field at a critical moment exposing Lazar's flank, leading to the Prince's capture. Sultan Murad died in or after the battle in any one of several claims including by another Serbian hero Milos Obilic who stabbed him whilst kneeling in submission. Lazar was beheaded along with other Serbian leaders.

What is certain that although the battle was an Ottoman victory the Sultan's elder son Yakub also died in the battle and therefore Bayezit had to establish the succession by returning to Anatolia. Serbia lost more ground, most leaders becoming Ottoman vassals (including Lazar's son and Brankovich), but did not finally lose its independence until 1459.
​
For the medieval world the battle signalled the might of the Ottoman Empire that was to dominate the Balkans for centuries to come. Kosovo also expresses the extremes of Serbian culture with fortitude and bravery - but also chauvinism and intolerance that has manifested itself in brutality. Either way the battle of Kosovo remains important today and this is reflected in the monument on the battlefield as set out below.
Battlefield looking towards the south west and the Ottoman positions. 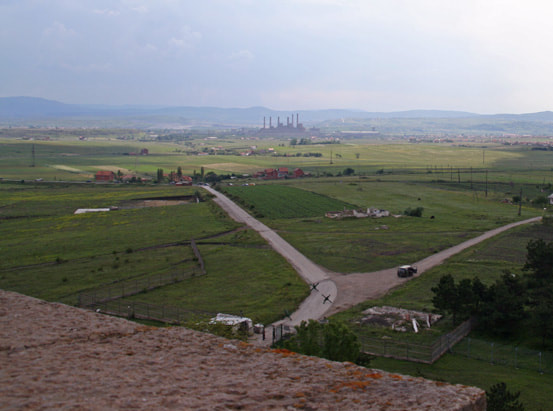 View to the north and the Serbian and allied positions.

East of the monument where some historians believe the battle actually took place.

The battlefield is situated near Pristina in modern Kosovo. The Kosovo plain lies at an altitude of 1300 to 1500 feet and is 9 miles wide and 52 miles long. It was an important crossroads in medieval times on the trade routes north-south (Belgrade to the Aegean) and east-west (Danube plain to the Adriatic ports). When these photographs were taken the monument was protected by KFOR troops.