The Knights Move (Operation Rösselsprung) was a combined airborne and ground assault by the Germans on Tito’s headquarters at the Bosnian town of Drvar in May 1944. Operation Rösselsprung involved the 500th SS Parachute Battalion (Captain Rybka) making an air drop on the town while several ground force columns (XV Mountain Corps)converged on Drvar, supported by the Luftwaffe.

Tito's headquarters was located in a cave about one kilometer north of Drvar. The town was also the base for various Partisan and Communist Party organisations along with the Tito Escort Battalion. The British and Soviet military missions to the Partisans and some US Officers were also based near the town. The British mission was led by Fitzroy MacLean, who was away at the time, but included Winston Churchill’s son Major Randolph Churchill. Around Drvar, there were between 12,000 and 16,000 Partisans who would engage with the ground assault, including the elite 1st and 6th Proletarian Divisions, six kilometers east of Drvar. The Partisan 5th and 8th Corps where respectively north and south of the town.

The German ground forces of von Leyser's XV Mountain Corps were reinforced by 202nd Panzer Battalion, the reconnaissance battalions of the 1st Mountain Division and 369th (Croatian) Infantry Division, and most of 7th SS Mountain Division Prinz Eugen. The plan was for a heavy aerial bombardment of Drvar, followed by a parachute and glider assault by 500th SS Parachute Battalion who aimed to capture or kill Tito and destroy his headquarters. Faulty German intelligence failed to clearly identify the cave as the headquarters and partisan intelligence downplayed the risk of a parachute attack.

On 25 May, over 400 Luftwaffe sorties bombed the town and the SS Parachute Battalion landed fairly close to their objectives. By accident one glider landed close to Tito’s cave, but was overwhelmed by his escort battalion. The paras fairly quickly secured the town despite resistance from communist organisations based there However, they realised that the fiercest response was north of the town near the cave, so Rybka reorganised his forces and at 10:30am attacked the mouth of the cave. They reached the base of the hill, but suffered severe casualties and were running low on water. Meanwhile, surrounding Partisan forces rushed towards Drvar including three battalions of the 3rd Proletarian Brigade of the 1st Proletarian Division from the southeast. Around 11:15am Tito escaped from the cave and moved to the village of Potoci.

The second wave of paras landed to the west of the cemetery at around midday and suffered casualties from the newly arrived partisan units. Rybka mounted a second attack, but it failed due to the strength of partisan forces and he withdrew to the cemetery position. Partisans counterattacked the cemetery throughout the night, but the Germans held on.

During 25 May, the ground forces of XV Mountain Corps advanced slowly due to unexpected resistance from the Partisan 1st, 5th and 8th Corps along with several Allied air attacks from the newly formed Balkan Air Force, based in Italy. However, recognising that they would eventually breakthrough, Tito ordered a withdrawal from Drvar. At 7am on 26 May, the paras established radio contact with reconnaissance elements of German ground forces, but it was not until 12:45pm that the 92nd Motorised Grenadier Regiment reached Drvar and relieved them.

The British mission regained radio contact, organising a major air intervention and a diversionary raid on the island of Brac. Tito was persuaded to evacuate to Italy, but was quickly back on the allied island base at Vis. Although his headquarters was temporarily disrupted and key staff lost, they quickly re-located and resumed operations. Drvar was reoccupied within a few weeks.

Further Reading
David Greentree, ‘Knight’s Move – The Hunt for Marshall Tito 1944’ in the Osprey Raid series. Good narrative of the operation together with many photographs and colour maps.
Osprey Warrior 73 covers Tito’s partisans and MAA 282 the Axis forces in Yugoslavia.
There are many allied memoirs of operations in Yugoslavia, of which Fitzroy MacLean’s are the most famous. For a German (or Austrian) perspective, I am currently reading Ben Shepherd’s, ‘Terror in the Balkan’s’. The Military Press publish, ‘Anti-Partisan Warfare in the Balkans 1941-45’, originally produced by the US army in 1954 with assistance from some of the German commanders.
There is a 1963 film, sadly not available in English or as a DVD that I can find.
Wargaming
My wargame club used this scenario for one of our display games in 2013 using Bolt Action rules in 28mm. Both the landings and the ground operations offer possibilities. Partisan forces used mostly civilian dress and Warlord (Bolt Action) has a good range - although Soviet, Italian and British figures can be adapted to represent the varied uniform sources. The Germans of course benefit from many ranges. Peter Pig can provide everything you need in 15mm. 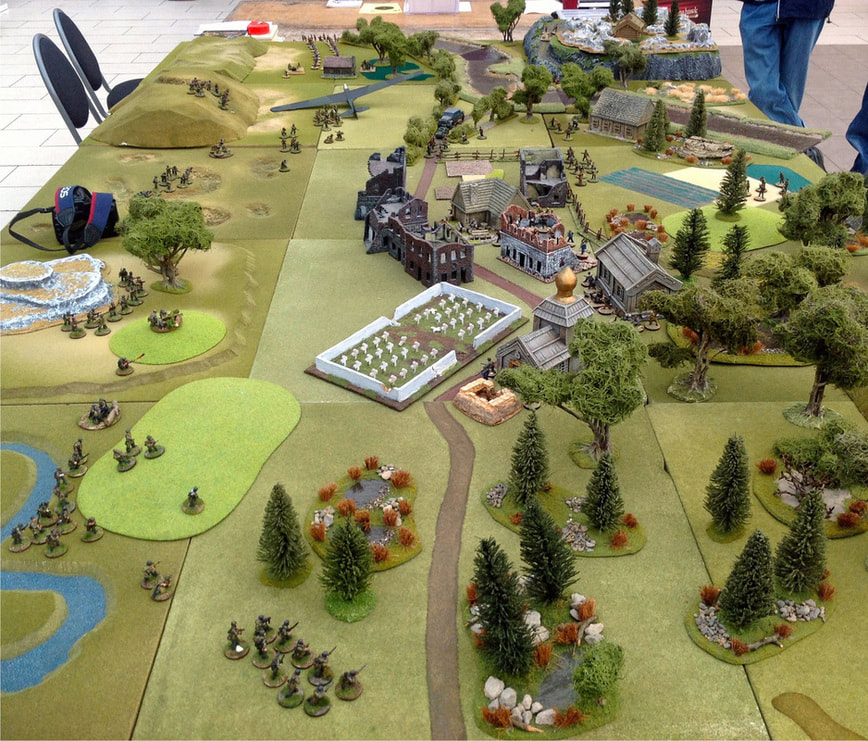