Highland Light Infantry in the Adriatic

The Highland Light Infantry (HLI), recruited mainly from Glasgow and the surrounding area. It was formed in 1881 and was amalgamated in 1959 to form the Royal Highland Fusiliers. Today, it is the 2nd Battalion of the Royal Regiment of Scotland. In WW2, the 2nd battalion served in East Africa and the Mediterranean, including Keren, the Western Desert and Sicily. They have a small museum in Sauchiehall Street, Glasgow.

In May 1944, the battalion was sent to the Adriatic island of Vis as part of the 2nd Special Service Brigade, a Commando formation tasked with defending the island and supporting partisan operations against the German-held islands and the Dalmatian coast. The HLI were trained specialists in mountain warfare and had mountaineering equipment, including cross-country ski boots. Private soldiers were called ‘mountaineers’ rather than fusiliers. Most of the duties involved garrisoning the island, which also served as a naval base for MTBs and MGBs. It also had an airstrip on the only flat area of the island, used by bombers in trouble returning from raids in the Balkans and Spitfires in the ground support role. 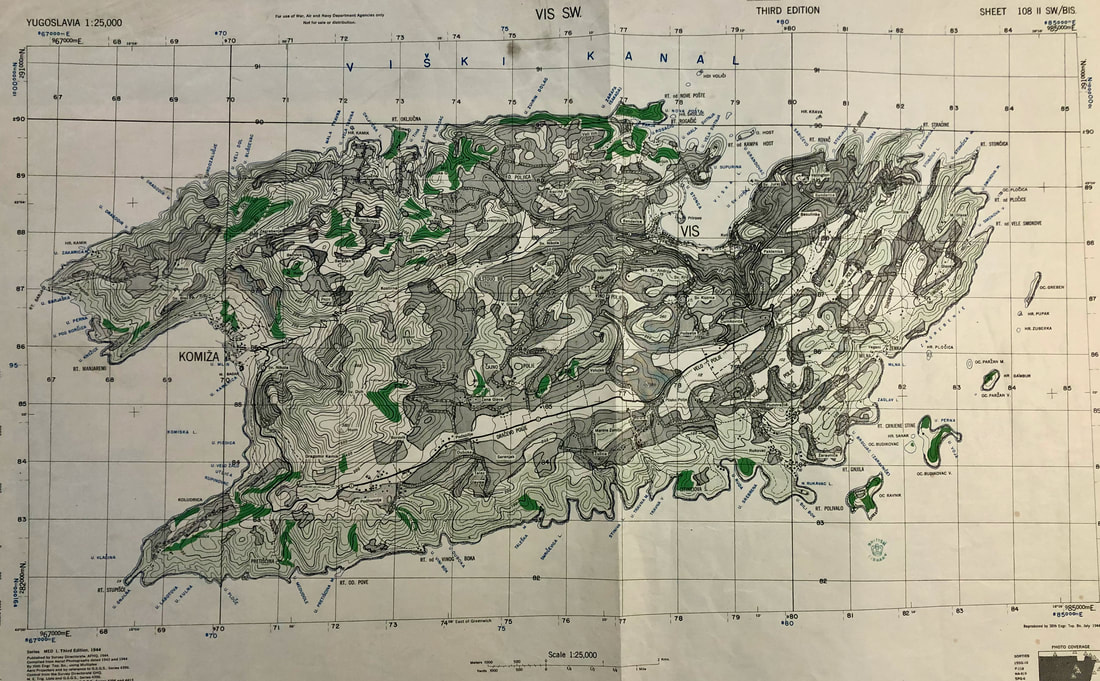 British wartime map of Vis
​In addition to garrison duties, they took part in raids on the islands to support partisan operations. These would typically include elements of several units based on Viz. For example, 40 Commando war diary for 22 May 1944 (National Archives, DEFE 2/48) describes Operation Foothound, an attack on Mljet which included C Company of the 2/HLI. Mortar and MG platoons were dropped off into covering fire positions while the HLI seized the high ground, directed by partisan guides who unusually had limited knowledge of the terrain. The commandos worked around the enemy positions, garrisoned by 250 men in four strong points, and attacked after Spitfires had softened up the defenders. The outcome wasn’t very clear from the report, but McConville (Small War in the Balkans, 1986) says the raid commander, Brigadier Tom Churchill regarded it as a failure. Two strong points were destroyed, but the rock formations were hard work for the troops, and wireless conditions were poor. The operation was called off at 4:30pm.